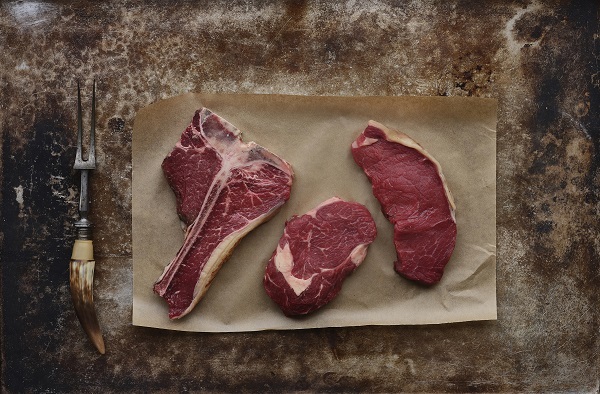 From blue to well done …its your choice

It comes from the lower middle of the cow’s back and does the least work of all the beef cuts, making it incredibly tender. It also contains little fat, which means there’s no need to cook fillet for a long time to break down any collagen. A fillet steak should be cooked over incredibly high heat as quickly as possible, to prevent the meat drying out. However, larger pieces of fillet are used to make dishes such as beef Wellington and chateaubriand, which are cooked in the oven for longer.

Is cut from just above the ribs, an area which does little work and makes rib-eye exceptionally tender. There are also ribbons of fat found throughout the meat, adding plenty of flavour, and an ‘eye’ of fat in the centre, which needs to be rendered down during cooking. While every person has their own preferences on how rare or well-done, they like their steak, with rib-eye it is generally suggested to cook it until medium at the least, as this gives the fat time to render down and baste the meat.

Another classic steak cut; rump is at the opposite end of the spectrum to fillet. What it lacks for in tenderness, however, it more than makes up for in flavour. Cut from the backside (Rump) of the cow, it is a muscle that is used quite a bit during the animal’s life, which means it’s tougher than other ‘prime’ steaks. However, it is still tender enough to be fried quickly and served rare.

Sitting somewhere between rump and fillet in terms of taste and texture, sirloin steak has the perfect balance of fat and tenderness. It comes from between the fillet and the rib, and we also offer this as a rolled and boned joint, ready for roasting whole. Sirloin steaks should be cooked in a similar way to rib-eye, allowing the fat to melt into the meat and to prevent chewy gristle. If roasting the joint whole, make sure there is a nice thick cap of fat on top of the meat to prevent it drying out, and regular basting during the cooking process helps keep everything tender.

T-bones are one of the few cuts of beef that are always served on the bone (which is shaped like a capital T, hence the name). On one side is a piece of sirloin and on the other is a smaller piece of fillet, which means there is more variety, flavours and textures going on. The fillet will always stay slightly rarer than the sirloin, as they cook at different speeds in the pan, and often the steak is seared and then finished off in the oven to ensure even cooking.

The flavour of a T-bone steak is big and bold, gaining an extra boost from being cooked on the bone.

Shop Ingredients for your perfect Steak